It is considered a good security practice to Disable Siri When iPhone is Locked to prevent the possibility of Siri being used to gain unauthorized access to your device. 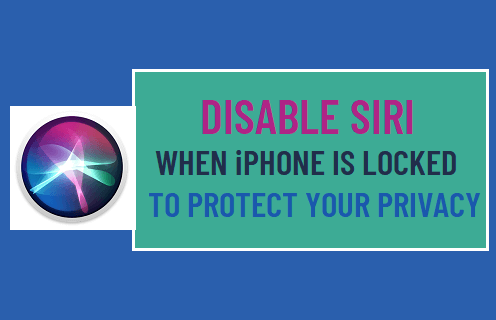 Disable Siri When iPhone is Locked

For convenience, Apple allows its users to call up Siri on iPhone to check weather, play music, make a call or send a message, without the need to unlock your device.

While this feature is cool and convenient, it can also be used to gain unauthorized access to your device by manipulating Siri.

1. Disable Siri When iPhone is Locked

You can Disable Siri Access When iPhone is Locked by going to Settings > Siri & Search and moving the toggle next to Allow Siri When Locked to OFF position. This will totally prevent anyone being able to voice activate Siri when your iPhone is locked.

To make sure that Siri cannot be accessed from the Lock Screen, go to Settings > Touch ID & Passcode and move the toggle next to Siri to OFF position. If you do not use Siri, you can totally Turn OFF Siri on your device by going to Settings > Siri & Search and toggling OFF Listen for “Hey Siri”, Allow Siri When Locked and Press Home for Siri options. On the confirmation pop-up, tap on Turn Off Siri option to confirm.

This will totally disable Siri on your iPhone and you won’t be able access Siri by Voice or by pressing the Home Screen to invoke Siri.