Home » Photos » How to Find Imported Photos on iPhone & iPad

When you open the Photos App on iPhone or iPad, you are likely to see Photos taken using the Camera on your iPhone and also Photos imported from other devices. 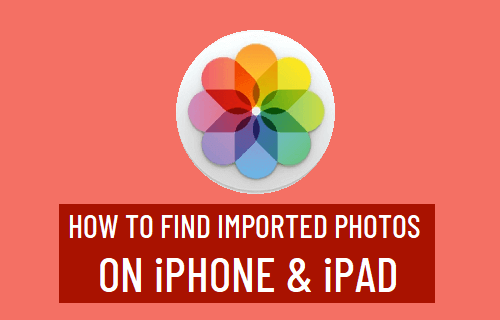 The good news is that it is easy to Find Imported Photos on iPhone and prevent Photos from other devices being downloaded to your device.

To Find Imported Photos on iPhone or iPad, open the Photos App and tap on the Albums tab. On Albums screen, scroll down to Utilities section and tap on Imports. All the Photos that you see in the imports Album have reached iPhone via iCloud from other devices linked to your Apple ID.

You can stop Photos from other devices being imported to iPhone by disabling “My Photo Stream” option on your device.

Go to Settings > Photos > move the toggle next to My Photo Stream to OFF position. Once Photo Stream is disabled, you will no longer find Photos from other devices being imported to iPhone. However, Photos that were already imported will still remain on your iPhone.

If you are trying to recover storage space on iPhone, you can get rid of imported Photos by manually selecting and deleting them.

Open the Photos App on your iPhone and tap on Albums tab.

On the next screen, scroll down and tap on Imports.

Once you are in Imports Album, scroll all the way up and tap on the Select option. 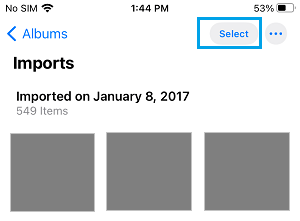 Now, you can either manually select Photos or tap on Select to select all items and tap on the Trash Can icon. Note: The originals of the deleted Photos will still be available in original devices from which they came from.